It’s hard to believe the last update to TKO was over a year ago but we got to make another TKO update for the Ben 10/Generator Rex cross over.

We added the following bots:

Again, we made new bots by recycling and shifting around existing moves but it resulted in some interesting combinations and created whole new dynamics.

As part of this update, though it went out earlier, our engineers fixed a huge lag issue that was introduced with the plug-in version of Flash Player 10.1.

Looking at the balance data was very interesting. When we introduced all the new Ultimate Aliens (Release 4 on the chart) for 10/10/10, ALL existing characters’ win percentages dropped sharply. The new bots win percentages were spread evenly throughout. After about 90 days everything evened out again, though new powerhouses like Ultimate Echo Echo remain high. 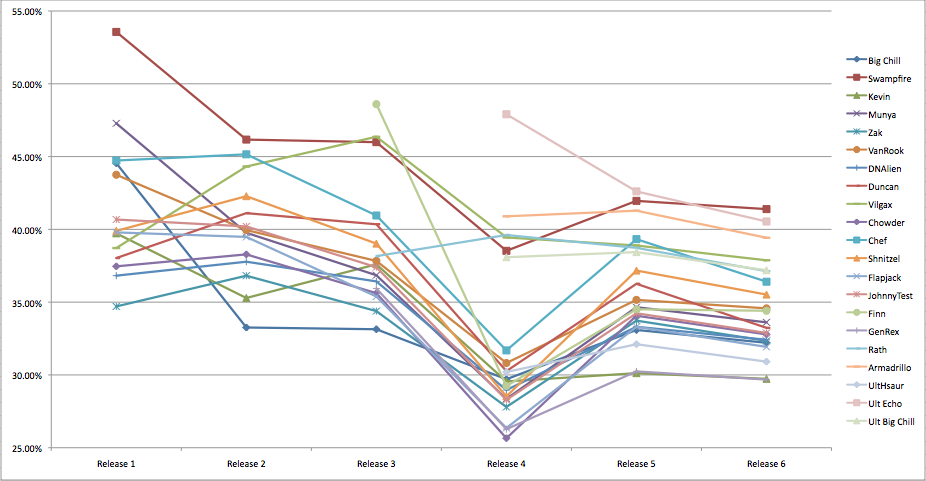 While TKO is an old product for CN.com, it performs very well. I was very happy when a player contacted when about a month before the release asking, “TKO is dead, right?”, and I was able to reply with a resounding “NO! New stuff soon!”

nice to see tko updated again your doing a great job on your games, but when is the next update to exonaut? are you still updateing it?

also do you have plans for the megalith?

awesome! thank you for makeing such a amazeing game!

can you give us a little more info like when its coming out?